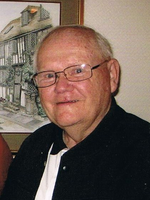 Vernon-Harold R. "Butch" Richmond, age 93, of Black Ave. West, passed away peacefully early Thursday morning April 18, 2019 at his home with his family at his side. He was born on March 27, 1926 in Munnsville, New York a son of the late Earl W. and Hazel (Robinson) Richmond and was a graduate of Stockbridge Valley Central School. From 1944-1946 Butch proudly served his county with the United States Navy during WW II. On July 3, 1948 Harold and Barbara C. Curtiss were united in marriage in Oneida New York and shared that loving union of sixty-seven years together until Barbara's death on December 15, 2015. Prior to his retirement in 1986 Butch was employed in the plating department of the Oneida Limited Silversmiths. He was member of the Vernon United Methodist Church, Oneida Limited Retirement Club, the C.A.C. and the Westmoreland Country Club. In his spare time Butch enjoyed walking, gardening, playing cards, square dancing, and bowling. He also enjoyed winters in Florida with his wife and spending time with his family. Surviving are two sisters, Isabel Scheid of Canastota and Elsie Brown of Clinton, special niece Sandra Borys of Sherrill, special nephew Jim Scheid of Canastota and many nieces, nephews, great-nieces and great-nephews and great-great-nieces and great-great-nephews. Family and friends are invited to call on Tuesday, April 23, 2019 from 5:00 to 7:00 p.m. at the Malecki funeral Home Inc., 23 Front Street, Vernon, New York. Funeral services will be held at 7:00 p.m. at the funeral home immediately following calling hours with Rev. Frank Loan officiating. Graveside services will be Wednesday at 11:00 a.m. in Stockbridge Cemetery, Stockbridge, NY. Donations in memory of Butch may be sent to The Vernon United Methodist Church, Hospice and Palliative Care or Nascentia Health, 1050 W. Genesee Street, Syracuse, NY, 13204. Online condolences may be sent to maleckifuneralhome.com