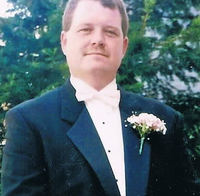 Verona- Kevin “Kippy” Lerch, age 55, was in the comfort of his home Friday, May 7, 2021 when he passed away surrounded by his loving family after a year long courageous battle with cancer. Kevin was born in Oneida, New York on August 12, 1965 a son of the late Jack E. Lerch Sr. and the late Phyllis (Stooks) Lerch Hammerle. He graduated from V.V.S. in 1984 where he was lovingly known as “Kippy”. On March 17, 1990 in the “world’s smallest church” Cross Island Chapel, Kevin was united in marriage to Vanessa La Clair a loving union of over thirty-one years. They were blessed with two children: Tiffany and Raymond of whom he is very proud of and three grandchildren that were the light of his life. Kevin enjoyed his life with little regret. He was the life of the party; he loved being with his friends, shooting pool, darts, cards, RC planes and cars, golfing, fishing, hunting, camping with his family at Verona Beach and watching the sunsets on the lake. He was also an avid Denver Bronco fan. Prior to his illness Kippy was employed as a cook at the Nothing Fancy Café in Vernon where he enjoyed his passion and joy of cooking. Prior to that he was employed with Carrier Corp. and was skilled in carpentry and drywall. His jokes could always put a smile on anyone’s face. His blue eyes sparkled and his laugh was contagious. We also loved it when his harmonica came out and Kippy was jamming with his friends and teaching his grandchildren how to play. Kevin leaves his loving wife Vanessa, daughter Tiffany, son Raymond, grandchildren, Owen, Reyna and Evan, his brothers Jack Jr., Randy, family friend Gerald Johnson, brothers-in-law Carl Cornish and Steve Reed, step-father Richard Hammerle and five nieces and nephews. Kevin was predeceased by his parents, sisters; Sue and Becky and brother Jeff. The family extends a special thanks to Don Bortle who has been a daily support and life line during this most difficult journey, Kipp’s “brother from another mother." As well as the staff for their care at the Oneida Upstate Cancer Center and the Hospice Staff. “Friends to the end” Family and friends are invited to call on Tuesday, May 11, 2021 from 4:00 to 6:30 p.m. at the Malecki Funeral Home 23 Front Street, Vernon where face coverings and social distancing will be practiced. Funeral service will be private and at the families convenience. Burial will be Wednesday at 2:00 p.m. in St. Helena’s Cemetery, 1776 Middle Rd., Oneida, NY. In lieu of flowers please send donations to Hospice and Palliative Care, envelopes will be available at the funeral home. Online condolences may be sent to maleckifuneralhome.com`