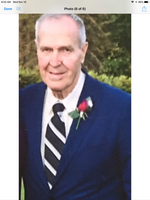 Verona- Kenneth D Fink, age 87 of Blackmans Corners passed away early Tuesday morning November 9, 2021 at his home surrounded by the love and devotion of his family. He was born on November 11, 1933 in Kingsport TN a son of the late James W. and Pearl (Wells) Fink. Ken was a 1952 graduate of Bradford Central School of Bradford NY where he won many awards, most of all proud of winning the Babe Ruth award for scholastic academics and all-around athlete given to him his senior year. He later went on to study mathematics for two years at Cornell University. He was married to Jane M Terrier and from that marriage the couple had four beautiful children. His hobbies included gardening, fishing, and playing scrabble. Kenneth's working career started at the Army Navy store in Oneida and moved to Sherrill in 1962, worked as Manager of Stars department store where he was transferred to Vestal and then to Torrington CT where he then owned and operate his tailoring business of Vitas tailoring shop. He moved back to Verona NY where he worked for the House of Good Shepherd and Arnotts until he retired. Surviving are three of his four children: Rodney and Dale Fink, Kendra (Fink) and George Hallman, Mark and Melanie Fink, his beloved grandchildren Melanie (Joe) Switzer, Thomas "TJ", Benjamin, Kelly, Jared (Sharee); Jason (Tori) and Paul Fink. Keith and Trevor Carlson, Mathew Hallman, Jessica (Stephen) Christensen, Ashley and Trinity Fink. Great grandchildren; Wyatt, Weston, Aubrey Abel Fink, Maisy Fink and Lillian Christensen, one son-in-law Bruce Carlson. Kenneth was predeceased by his daughter Lauri (Fink) Carlson and infant son Kenneth. Family and friends are invited to call on Friday November 12, 2021 from 11:00am to 1:00 pm at the Malecki Funeral Home Inc., 23 Front Street, Vernon NY. A funeral service will be held at 1:00pm immediately following calling hours at the funeral home with Pastor Russell Johnson officiating. Burial will follow in Grove Cemetery, Durhamville NY, Online condolences may be sent to maleckifuneralhome.com»(Do not delete this line. It does not print. Text that is to appear on web must be entered before this line)