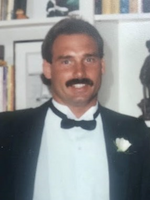 Sherrill – Timothy Lust, 63, passed away on Monday, November 15, at the Syracuse VA hospital following a lengthy illness. He was born July 29th,1958, in Oneida to Warren and Betty Lust. He was honorably discharged from the Marine Corps in 1979. Tim is survived by his brother Mike Lust, sister-in-law Sue Lust, and the nieces who adored him: Erin Petitmermet (Brian), Katie Stewart (Brandon), Kim Lust, Olivia Lust, and Sara Lust, as well as four great nephews and nieces. He was preceded in death by his parents and his brother Chris. A memorial service will be held on December 3rd from 4 to 6 PM at Malecki Funeral Home of Sherrill. »(Do not delete this line. It does not print. Text that is to appear on web must be entered before this line)