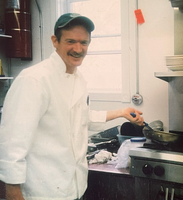 Sherrill-John T. "Jack" Glasgow, age 60, a longtime Sherrill resident passed away unexpectedly Friday March 4, 2022. He was born on September 23, 1961 in Oneida, New York a son of Wallace G. "Wally" and Adaline (Mills) Glasgow and was a graduate of Vernon Verona Sherrill Schools and broadened his culinary skills with the Culinary Institute of America. Jack proudly served from 1978-1982 as a submarine cook with the United States Navy. In his spare time he enjoyed times spent with his friends. Most recently Jack could be found using his culinary skills at the American Legion Post 230 of Sherrill in the kitchen cooking some of his special dishes and soups. Surviving are his mother Adaline M. Glasgow, his niece, Abby DuBuke of Durhamville, two nephews, Aaron Guiliano of Fl. and Chad Guiliano of Oneida and many friends to mourn his passing. Jack was predeceased by his father Wallace "Wally" G. Glasgow and his sister Sandy. In keeping with Jack's wishes there will be no public calling hours or services. There will be a Celebration of Life in memory of Jack on Saturday, March 19, 2022 from 2:00 p.m. to ? at the Sherrill American Legion, 168 E. Seneca Street, Sherrill, NY, 13461. In memory of Jack donations may be made to the Legion, please call for additional information. Arrangements are with the Malecki Funeral Home of Sherrill. Online condolences may be sent to maleckifuneralhome.com