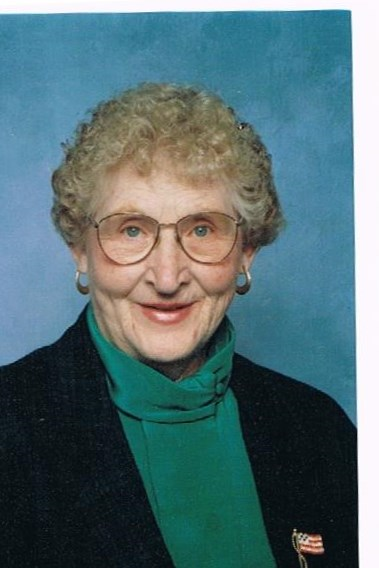 Durhamville-Dorothy “Emogene” Cmaylo, age 95, of Rt. 46 passed away peacefully Sunday morning September 29, 2019 in the comfort of her home.

She was born on July 28, 1924 in Franklin, PA a daughter of the late Myrne A. and Sarah J. (Suits) Moose and was a graduate of Westmoreland High School.

On June 7, 1947 Emogene and Emil Cmaylo were united in marriage at St. Francis Church of Durhamville and shared that loving union of forty-one years together until Emil’s death in October of 1988.

Prior to her retirement in 1982 Emogene was employed with the Oneida School System as a teacher’s aide. For many years she opened her home and heart to raise foster children.

She was a member of DAR Sconondoa Chapter, Town of Verona Historian for over twenty-five years, Bartlett Baptist Church and was foreman of the original Durhamville Veteran’s Auxiliary.

Emogene was predeceased by her husband Emil in 1988, infant daughter Janet Marie in 1950, daughter Jeanne Marie in 1976, and in 2011 her brother Richard E. Moose.

Family and friends are invited to call on Thursday, October 3, 2019 from 4:00 to 7:00 p.m. at the Malecki Funeral Home Inc., 23 Front Street, Vernon, NY. Funeral services will be held 10:30am Friday October 4, 2019, at the funeral home with Emogene’s son William Cmaylo officiating. Burial will follow in St. Francis Cemetery, Durhamville, NY. Online condolences may be sent to maleckifuneralhome.com

To send flowers to the family or plant a tree in memory of Dorothy Cmaylo, please visit Tribute Store
Thursday
3
October